Bitter is a traditional British beer which varies hugely in character and depth.
The beers held under the style of Bitter can range from pale golden to a deep chestnut brown in colour. Also alcohol content of Bitter, can range from around 3-7% ABV.

Ever since I came to Japan I realised that something was missing in the great craft beer scene we have here.
Though we can find many great import beers from America, Germany, Belgium or The Czech Republic etc. as well as the many  other styles of great beers from the brewers of Japan – a true to style range of good English bitter is extremely hard to find.
The one month sea journey that it takes from England to Japan really prohibits certain brands under the style from coming over here – Bitter is a drink best enjoyed extremely fresh.
Long maturation times mute the perfect balance of Hops, Malt and Yeast – which makes this beer style so incredibly hard to replicate for brewers.

Although the name would suggest so – Bitter is not an extremely hoppy beer.
The name came about because traditionally (and before the creation of India Pale Ale), Bitter would be the most hoppy beer a brewery would produce year round – considering the normal line up would be styles such as Mild, Porter and brown ale.

Each sub category in itself can range vastly in colour and aromas and difficulties presented to the brewer because of the low alcohol content making it harder to balance the ingredients.

Traditionally, bitter is packaged into casks. Cask beer has less fizz than keg beer and is very different technique that the brewer must use to create it.
Cask beer is best served at slightly higher temperatures (11-13 degrees centigrade) and it is extremely important it is served fresh! Once a cask has been opened, it must be finished within 3-5 days – otherwise microbes in the air as well as oxygen, will turn the beer bad.
Due to this, cask beer is extremely difficult to market at the moment in Japan, so we had to go with Keg.

For the second specialty beer (much like the first with the English IPA) I wanted to show beer drinkers in Japan what true to style English Beer can taste like.
I’m a big fan of American IPAs and although they have high impact, some lack the subtleness, complexity and depth that I have really missed about great British beer.
In a good bitter, nothing alone should stand out and different flavours will become apparent at different times and as the glass warms up – though this is true of almost any well-crafted beer, I have not yet found a style where it is quite as apparent as in Bitter.
I’m sure I’m not the only Englishman living in Japan who misses the beer of England – it was the first thing I missed about home.

The Bitter we brewed at Brimmer Brewing is an ESB (Extra Special Bitter) and is 5.6% ABV.
Traditionally this beer can be heavier in body than other Bitter sub-categories, but we are extremely happy with the balance and how easy to drink the beer has turned out.

Using English Pale and coloured malts to create a strong backbone of maltiness is one of the most important steps – the combination of malts we have used has given this beer fruitiness and a slight hint of smokiness as well as a beautiful, deep red colour.
Hops used are Goldings (grown in the traditional English hop growing region of Kent) and Willamette (a more robust, consistent and disease resistant hybrid of the English Fuggle). The combination of the two give a floral aroma, balancing the strong malt flavours.
Combined with the addition of a traditional English yeast, the character of these ingredients is changed by the aromas the yeast creates as it works with the beer to produce alcohol and carbon dioxide.

ESB is now available in Kegs.
Bottles are currently sold out, but we plan to bottle more in 2 or 3 weeks time. 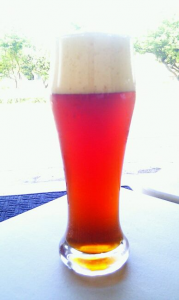 Our light bodied and easy to drink introduction to the craft beer world.